A tribute to Camille Claudel

This text was published first time in danish in AF-ART Magazine vol. 9, October 2019. This is the 2nd version.

AS AN ARTIST YOU HAVE COLLEAGUES across ages. A dialogue between my own and a colleague’s work can well happen, even though they have been produced in different eras. However, I - as a contemporary female sculptor - have found it difficult to find role models in the Art History. The sculpture tradition is dominated by male artists. The work in the sculpture studio is messy and physically challenging. The materials are heavy and intractable; fluid plaster, scorching metals, rock, hammer and chisel. But of course, historically there have been female sculptors and sculptures are not all about density and proficiency. In fact, within recent years my perspective on sculpture has to a greater extent been about lightness and air.

AIR IS ESSENTIAL FOR THE WORK PROCESSES with traditional sculpture materials. For example, air is a necessary precondition for the creation of fire that can melt the metal down to the liquid form, used for casting bronze sculptures. In the same manner air is also fundamental for plaster to set into the solid form, we know from museum’s collections of casted sculptures.

Air can also be found in alternative, more untraditional sculpture materials. I like to work with sealed or encapsulated air; in puffer jackets, bubble wrap or inflated product packaging. Air held in small chambers to keep us warm or to protect objects from being damaged.

Packages are shipped from one side of the world to the other. And with a squeeze, one can burst the bubblewrap between one’s fingers - air from distant countries flows out and becomes part of one’s own atmosphere, like a global ventilation system.

Air is essential for most living beings; plants, people, animals. But air can also be dangerous, spreading spores, viruses and forest fires.

DURING THE SUMMER BEFORE I GRADUATED from the Art Academy, I worked on a number of plaster studies. 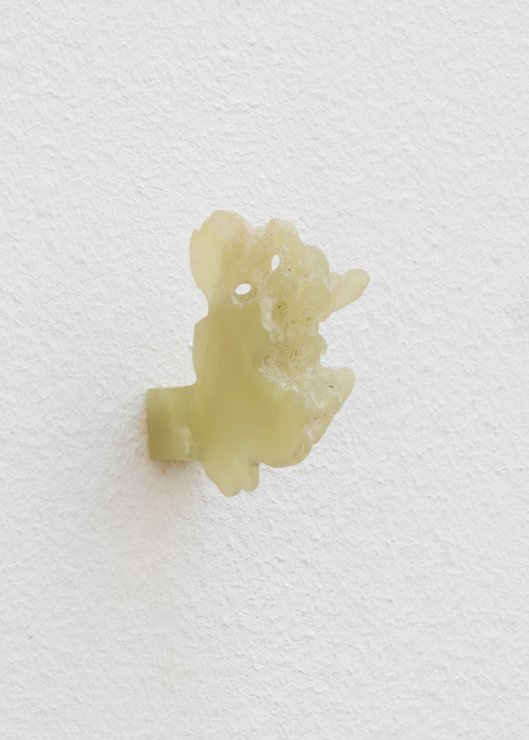 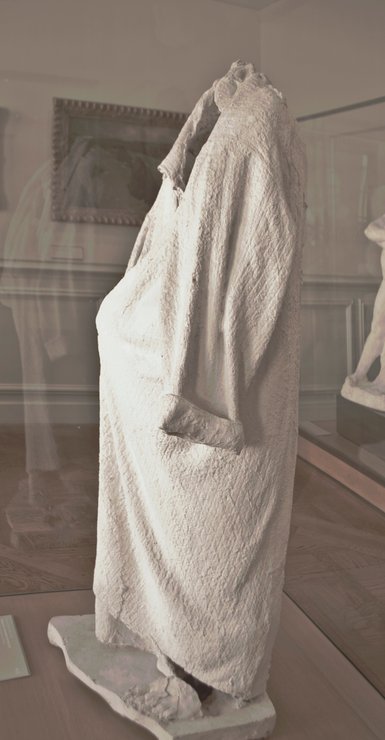 These studies where made from strips of sackcloth dipped in plaster and arranged on top of furnitures and various racks, that I found in the sculpture workshop. While I was doing these experiments, the professor at the Plaster Lab, Pontus Kjerrman, mentioned that the artist Auguste Rodin, in a study for his monumental sculpture, Monument à Balzac, in the same way plunged a dressing gown into a bucket of plaster. The dressing gown was a replica of the deceased writer Balzac’s own gown, one which he wore while writing. The replica Rodin used, was made as a copy of Balzac’s original, by the same tailor.

Rodin’s process with the gown, echoed so- mething of what I had done with the sackcloth strips. Considering his time, I was astounded by Rodin’s modern and conceptual approach – the dressing gown as a kind of ‘pre-readymade.’ It was in this connection, through Rodin, that I also became aware of Camille Claudel (1864- 1943).

Claudel was also a French sculptor. Claudel studied at Académie Colarossi in Paris, one of the few art academies that accepted female students in 1882. Later she was employed as an assistant to Rodin and worked in his studio. She was one of the leading forces behind a library of plaster casts; a collection of casts of moulded hands, arms, and legs that served as models for Rodin’s sculptures.

CAMILLE CLAUDEL’S OWN SCULPTURES where often constructed as shells, with one abstract side, where the raw material was exposed, while the opposite surface, often the side facing inside, depicted naturalistic human bodies.

When Claudel worked with plaster, she used a quick method of bundling rough strips of sackcloth wetted in plaster, which gave contrast to the more detailed figurative casted side of the sculpture.

When Claudel began her job as Rodin’s assistant, she got involved in decisions about the sculptural process and craftsmanship as well as the very content and composition of his sculptures. They were as much competitors as collaborators. During the ten years Claudel was attached to Rodin’s studio, many of their individual sculptures share almost identical motifs and proportions. Who inaugurated the motifs first varied, but when you look at their near indistinguishable smaller sculptures, you can’t help but feel that there was a competition going on between them.

Claudel and Rodin also had a love affair which lasted for fifteen years. The affair has unfortunately overshadowed their artistic collaboration and not least Claudel’s own artistic practice. Her artistic method was ahead of her time: contrastive, modern and conceptual. 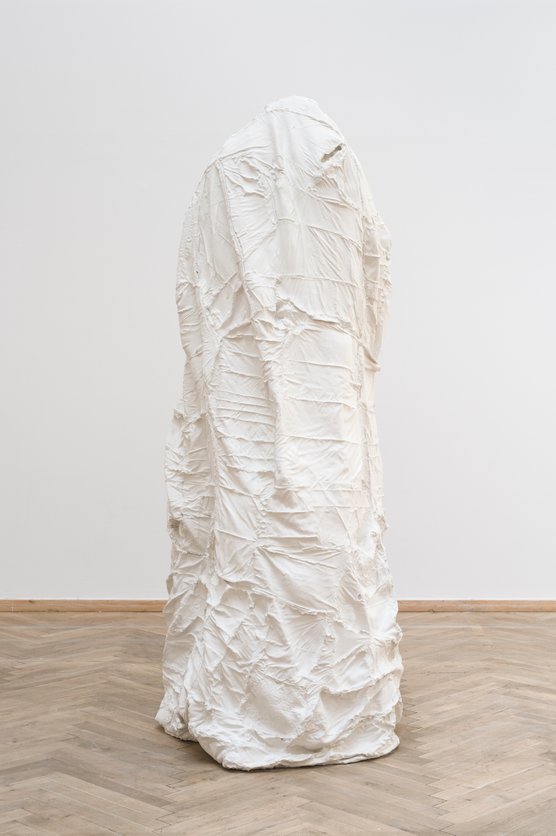 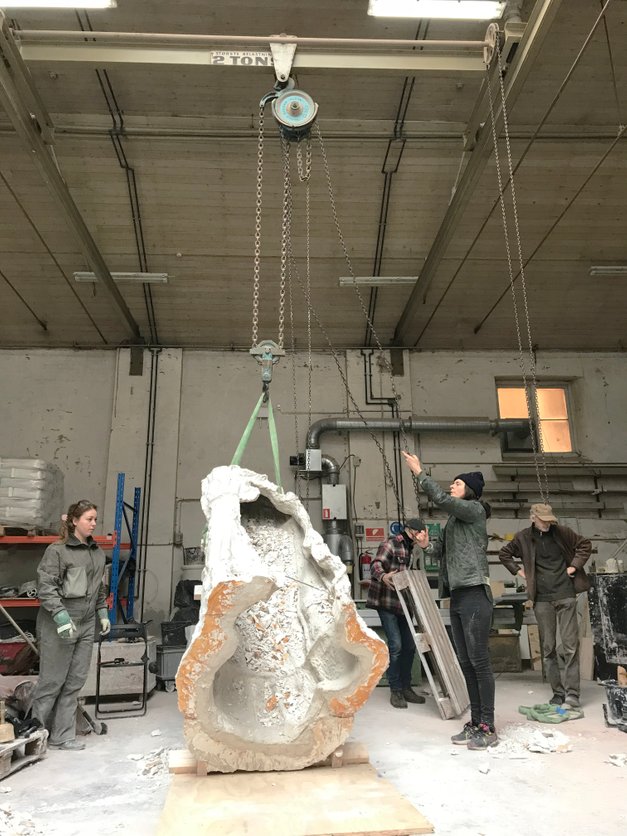 Cape for Camille, 2018 (Ida Retz Wessberg to the left)

Rodin’s career was unaffected by their affair. He remained married to his wife, Rose Beuret, who had supported him through the early stages of his career. After ending the affair with Rodin, Claudel went through some strenuous years of poverty and mental health challenges. Some believe that their separati- on was premised by an abortion Claudel had just before the separation. At age fifty, she was admitted to a psychiatric institution and remained hospitalised for the rest her life.

THAT SUMMER WHEN I BECAME FAMILIAR with Camille Claudel, I began working on two new pieces, ”Camilles kåbe” (Cape for Camille) and “Lufthul i Onyx Marble” (Air hole in Onyx Marble). Cape for Camille is a plaster sculpture 230 centimetres tall, the other one, Air hole in Onyx Marble, is a more discreet sculpture, made in green onyx and no bigger than a pack of chewing gum. Both of the sculptures exami- ne air, gender and the body, as their themes.

Cape for Camille refers back to Rodin’s sculpture Monument à Balzac. It is a plaster cast of an enormous dressing gown made from several puffer jackets sewn together. On the sculpture’s exterior side, the cast precisely replicates the details of buttons, stitches, logos etc. from the puffer jackets.

But as the plaster casting is shaped by the negative form, It is a mirrored image of the surface of the jackets. The bulges of the jackets are also inverted, their volumes are concave instead of convex. By contrast, the inner surface

of the gown is made in roughly daubed plaster, exposing the technique and material process of its creation. This approach – contrasting inner and outer – is my tribute to Claudel.

THE CASTING TECHNIQUE IS GENERALLY based on the principal of the difference between positive and negative form. A negative form, the void, can be filled with a substance which will take the shape of the vacuity and create a new positive form. For example, when you fill a casting form with liquid plaster, you vacate the space for air - and replace it with a solid form.

To perceive air as a sculptural material, might sound as a contradicting argument, but it is often the desire to preserve a certain lightness, despite the solid material, which is the designation for my artistic practice.

When you cast in plaster, small air bubbles will now 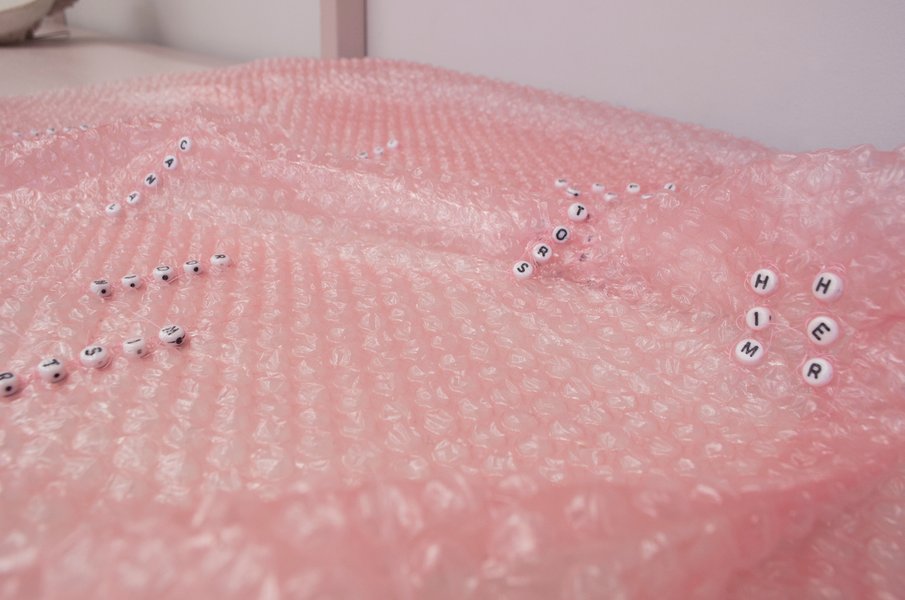 and then emerge in the material. These bubbles are again creating another negative form which can be filled.

This is how Air hole in Onyx Marble was de- veloped. Liquid wax was poured into such a pla- ster air bubble. The wax cast was then placed onto a little base, a kind of plinth to mount the cast on the wall. This piece was then 3D-scanned and a new, second piece, was carved out in equivalent proportions in green onyx marble by a machine.

THE GREEN ONYX MARBLE WAS ONE OF Claudel’s preferred materials. For my own, small sculpture I wanted to use a mechanical, modern technology to create a contrast to the beautiful natural made stone. Additionally, the machine that was used to carve the tiny figure was enormous, thus the production cost was very high.

I found this relationship, between the sculpture’s size and the different production costs, an interesting paradox; a detail that proposed a question of reciprocal hierarchy between the two sculptures; Cape for Camille and Air hole in Onyx Marble.

Besides, this process also pointed toward a historical perspective on gender roles. That I, as a contemporary female artist, was able to hire professional craftspeople and assistants. Something Claudel never was able to, although her male contemporaries (Rodin, for instance) often had their sculptures executed by hired craftspeople and assistants.

THE STORY OF CLAUDEL AND RODIN IS A story of how gender and class can overshadow what really matters – an exciting artistic collaboration and a (female) sculptor’s independent practice. What is most important, the front or the backside, the void or the mass? These are the themes of Cape for Camille and Air hole in Onyx Marble.

Sadly, Claudel herself destroyed much of her own work. Only around ninety artworks have survived till today. In 2017, Musée Camille Claudel opened in Nogent-sur-Seine outside of Paris. With it, I hope a renewed interest in her artistic work will flourish. 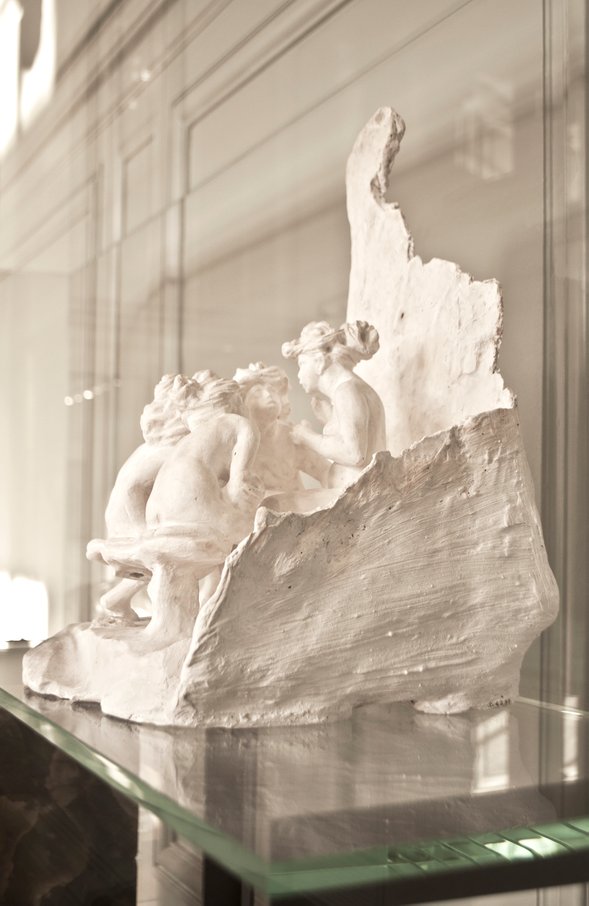 IDA RETZ WESSBERG (B. 1986, DK) HOLDS AN MFA
in sculpture. She graduated in 2018, from The Royal Danish Academy of Fine Arts, Schools of Visual Arts.
Beside her artistic practice she is also doing Artistic Re- search on Camille Claudel and Claudel’s contemporary Art Scene.

In 20201 she will do research in Paris, in Centre de Recherche Musée Rodin Paris, where she will investigate how Claudel’s life and career was influenced by the perception of gender roles of the time and compare the Art Scene at the time with today’s Art Scene.

You can read Retz Wessberg's article (made at her residency in Paris in 21'). The article is on Camille Claudel and compare her case with the recent #metoo cases at the Art Scene here published by the artsite Idoart.dk (at the moment only available in danish).